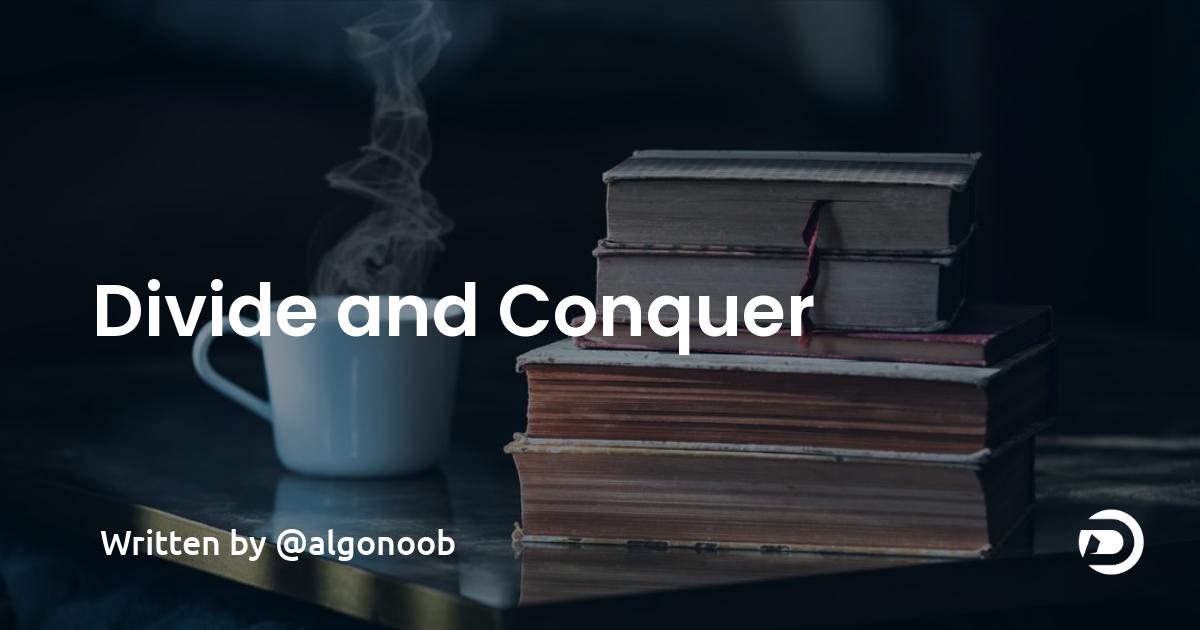 Divide and conquer is just a simple yet complex strategy of solving problems. It basically includes the idea of dividing a problem into sub-problems or smaller problems. We solve each sub-problem one by one until all the sub-problems are solved.

This strategy is useful when you're given a task of solving a bigger problem with higher complexity. You can just substitute that big problem into smaller and simpler sub-problems and then solve each of them one by one.

This strategy usually consists of 3 steps-

Suppose that you're really hungry and you wanna prepare a sandwich for yourself. How would you prepare it? It is obviously gonna include some simple steps like getting the ingredients, cooking them up, stuffing them inside the bread and so on. isn't it? The combined effort that you invest in all these steps would finally result in a sandwich at the end.

In a similar way, you get a problem, you divide it into smaller steps and then combine them all up one by one in the right order to get the required end result. That's what Divide and Conquer Algorithm is all about.

The divide and conquer strategy is used in many algorithms. Usually, recursions are used to divide the problems and combine the sub-problems.

Suppose that we're applying Divide and Conquer strategy to sort an array. In this case, the array of numbers that we have to sort would be considered as the big problem. So, the steps that we can follow could be -

The type of sorting that we defined just now is called The Merge Sort. It is faster than the other sorting algorithms like Bubble Sort or Insertion Sort as this algorithm doesn't iterate over the whole array as we can see. Therefore it is considered to be efficient when applied on larger arrays.

The complexity of algorithms that use this kind of strategy is usually calculated with the help of Master's theorem.

Recursions are considered to be slow, which is one of the main problems with this strategy. Also, sometimes using this approach is not quite beneficial as it makes the problem more complicated than easier, for instance - when we start using it at situations where we could've simply used iterative method. Recursions over-complicated the problem at such situations.

Some important applications of Divide and Conquer can be observed in sorting algorithms like - Merge Sort and QuickSort. Strassen's algorithm for Matrix multiplication also makes use of it. Usually we find its application in problems that can be broken down and merged easily.

This was all about the Divide and Conquer Strategy of problem solving. I hope you liked reading this article. You can find more such articles here.